Marvel actor Jeremy Renner has been seriously injured following the accident after New Year’s day involving a snow plow. The reports that surfaced at the time only stated that the incident had been weather-related and the actor’s condition was stable. However, current news and speculations have brought more information to light and it doesn’t sound too good.

In Washoe County, Jeremy Renner was grievously injured after being run over by a snow plow vehicle. The actor was immediately attended to by a doctor and flown to the hospital for surgery. Although the surgery went well and Renner’s condition shows signs of improvement, more details have come to light that suggests that the actor also suffered blunt chest trauma and orthopedic injuries that could render permanent damage to his leg.

As expected, fans on social media are not reacting well to the news.

The Mayor of Reno, Hillary Schieve, also released a statement via the Reno Gazette Journal to elaborate on the extent of Renner’s accident and investigation revealed that the actor was injured by his own vehicle after getting off on the side of a road to help a stranded car. His family has released a recent statement declaring:

“Jeremy’s family would like to express their gratitude to the incredible doctors and nurses looking after him, Truckee Meadows Fire and Rescue, Washoe County Sheriff, Reno City Mayor Hillary Schieve […]. They are also tremendously overwhelmed and appreciative of the outpouring of love and support from his fans.”

The actor is currently being kept in the ICU and his condition has improved from critical to stable. 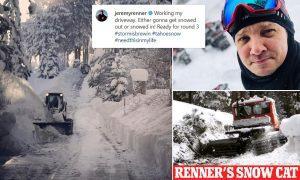 Jeremy Renner’s Arm Fractures on the Sets of Tag
Jeremy Renner, the Disney+ Hawkeye actor, is infamous for his role within the Marvel Cinematic Universe, but beyond that, Renner is a two-time Oscar-nominated actor recognized by the Academy for roles in The Hurt Locker (2008) and The Town (2010). But it was on the sets of Tag, a film inspired by the true story of long-time friends who unite each summer to revisit the childhood game of “tag”, that the actor made headlines for seriously injuring himself. 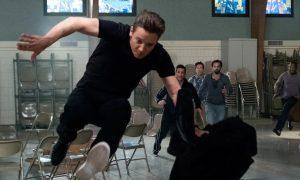 Not many actors would have the skills necessary to fall off a stack of chairs piled 20 feet high and that’s where the stuntmen come in. However, after definitively proving himself capable of pulling off the sequence, Renner ended up with two fractured arms but remained on set to finish filming the scene before being taken to the hospital.

At the time, the actor claimed, “I’m sort of a problem solver, you know. There will be an effect to it, but it won’t stop me from doing things that I need to be doing. I’ll heal fast.” Hopefully, his recent injuries can be impacted by a similar show of will as the 2017 incident.