“Then say the f*****g line”: Avatar’s Director James Cameron Yelled at Arnold Schwarzenegger After the 7 Time Mr. Olympia Argued With Him About Movie Script

When Arnold Schwarzenegger had a back-and-forth with the True Lies director regarding a particular line in Terminator Genisys, James Cameron reportedly told the veteran actor to “say the f*****g line”. As per conversations by the Predator actor, he had a back-and-forth with the director on the sets of the 2015 movie. Reportedly considering saying a particular line that didn’t sit well with the actor, he discussed it with director James Cameron. What happened later is a story that Arnold Schwarzenegger came on The Howard Stern Show to recall. Howard Stern opens the discussion by stating that although Arnold knew the character intimately, he almost blew his most famous line. Schwarzenegger starts telling the story of the time when the Aliens director had to tell the actor, “Then say the f*****g line”.

“I very casually said y’know James, I said ‘I WILL be back’ and I thought it was just gonna go right by and he would say ‘yeah yeah whatever you want y’know’. He [James Cameron] said that ‘no I like this but say ‘I’LL be back’”

The Total Recall actor continued how Cameron insisted that they go with his version of the line even though a robot wouldn’t say ‘I’ll’ (as per Arnold Schwarzenegger).

“Plus it sounds really weird when I say ‘I’LL’, it sounds weak. And he says ‘no no no, just say I’LL be back.” When Arnold went a bit further the director lost his cool with the actor, as per Schwarzenegger, here’s what Cameron said, “What does the godd*mn script say? And now I [Arnold] said ‘it says I’LL be back’ and he says ‘then say the f*****g line!’”

The actor stated that James Cameron further went on to say that he doesn’t correct Arnold’s acting so he cannot correct Cameron’s writing. The whole ordeal was of course done in good humor since the duo has known each other from the early 80s up until the present time. 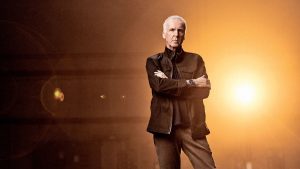 As stated earlier, the duo has known each other for a long time. With the iconic role of the Terminator that Arnold Schwarzenegger has been attached to, it was James Cameron’s creation.
The Terminator 2 director and Arnold have been quite good friends since the earlier days of Hollywood. James Cameron is currently busy with his upcoming magnum opus Avatar: The Way of Water.

With Avatar: The Way of Water looming on the horizon, it is difficult to tell if the director will once again collab with Arnold Schwarzenegger and if he does, will it be another Terminator movie or something different?

Avatar: The Way of Water is set to release in theaters on 16th December 2022 across the globe.