“I think it’s in the spirit of Rocky”: Michael B. Jordan Goes Into Damage Control, Claims Creed 3 Honors Rocky Balboa After Sylvester Stallone Was Unhappy With Franchise Going Into Darker Direction

Sylvester Stallone has been a total legend and he still continues to entertain us to the fullest. While he has been impressing us in his latest series, Tulsa King, people will be missing him in the upcoming Creed threequel. Rocky Balboa has been the biggest role in Sly Stallone’s decades-long career. And even after his own solo franchise ended, he played a couple of crucial roles in the two Creed movies. But unfortunately, he won’t be back in Michael B. Jordan’s Creed 3 as the franchise takes a darker turn.

How Creed Continues in Rocky’s Absence 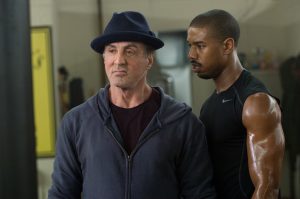 Sylvester Stallone made his debut as Rocky all the way back in 1976. Then he starred in 5 more Rocky movies, which came out until 2006. When you thought that the old man would be done with Rocky Balboa after that, he came back 9 years later in 2015’s Creed. It turned out to be a really powerful entry, and then the second one became even stronger with the rivalry between Drago and Balboa being revived. But Sly Stallone had already claimed that Creed 3 would be his last outing. So, Creed 3 is supposed to feel very different.

But director Michael B. Jordan still states that even though the Hollywood veteran isn’t returning to reprise Rocky Balboa, the “essence of him is still there” in the upcoming Creed sequel. The film will honor Rocky’s Legacy. Here’s what Jordan told Empire Magazine:

It’s really diving into the Creed universe and having him evolve, start his own family and go through his own trials and tribulations in life. It’s allowed Adonis to stand on his own two feet and use the wisdom he’s learned from Rocky in the other two films. I think it’s in the spirit of Rocky, whose fingerprints will always and forever be on this franchise. The essence of him is still there. But at the same time, the Creed franchise is moving in a strong direction.

While we would have loved a cameo from Stallone to give his character a sendoff, it’s okay for him to be absent as well.

Why Creed 3 Will Be Fine Without Rocky

Stallone chose to exit from Creed 3 because the movie has taken a different and much darker direction than he would have liked. But it is okay for him to be absent this time. Rocky obviously played a huge role in Adonis Creed’s career. But Adonis needs to get out of Rocky’s shadow now. He will be fighting the demons of his past and he needs to do that alone in order to prove that he is his own man now.

It’ll be nearly impossible to fill old Rocky’s shoes in this film. But the weight of his absence will be balanced by the newcomer, Jonathan Majors who will prove to be an excellent rival against Jordan’s Adonis Creed.